This dish started out as a quick Monday night meal before morphing into something slightly more complex, a memory of one of my favourite student dishes. When travelling in Spain in the early ‘00s I frequently ate plates of rice topped with a simple tomato sauce and a fried egg. It was delicious and cheap and kept me well-fuelled throughout my stay in Barcelona and beyond.

12 years later, in London, I started out with a packet of cod loin and the intention of making a baked fish dish. Too tired to hit the shops, I decided to serve it with what I had to hand, which was rice. The mere thought of a tomato-based dish served on rice took me straight back to Barcelona and the presence of a lone potato in the veg basket and an abandoned heel of French bread gave birth to this dish.

You could, of course, double the size of the rosti and eliminate the rice, or vice versa. 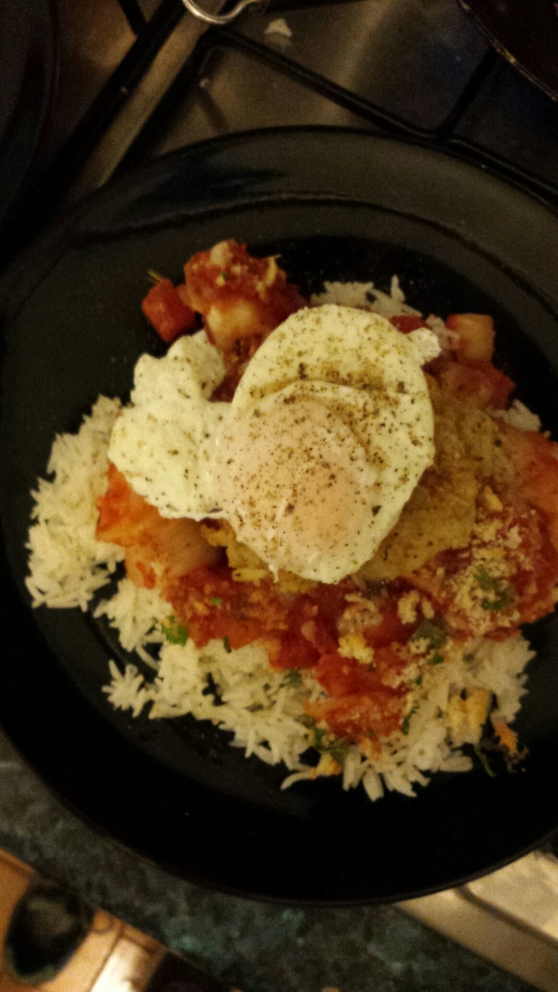 For the baked fish

To start, preheat the oven to 180C, then grate your potato and sprinkle with salt, then place in a sieve over a bowl. Next, fry the onion in olive oil until soft, then add the garlic and stir until fragrant. Throw in the tomatoes, rosemary, salt and pepper and warm through on a low heat. While the sauce is warming, press as much moisture as possible out of the grated potato. Place the fish in a glass or ceramic baking dish and cover with the tomato sauce. Sprinkle the breadcrumbs on top and put in the oven for 25 minutes. Have another go at squeezing the last drops of moisture out of the grated potato, then toss in a bowl with parmesan, salt and pepper and form into two flat cakes. Heat some vegetable oil until hot, drop the potato cakes in and turn with a spatula once a crust has formed. Once the rosti are crisp on both sides, turn the heat to low and cook for a further five minutes. Once the rosti are done, fry a couple of eggs in the same pan, or alternatively poach them in boiling water.

For a hearty meal, I served my fish on a bed of basmati and placed the rosti and egg on top, but you can lighten it up by eliminating the rice.