My first impression of the USA is the airline. Delta Airlines and its employees are determined that I should not experience the horrors of hunger whilst in their care. It’s not that I don’t think I’ve ever been fed so insistently on a flight – but that I’ve never been fed so insistently full stop. The first hour it’s nuts and pretzels. Next it’s drinks. The US travellers, already versed in the Delta drill, enquire after biscuits – sorry, cookies – but these are not served on international flights.

An hour later, a mere hour into Judi Dench’s deliberations over whether or not to romance Bill Nighy, hot hand towels are brought out and it’s time for lunch: something that looks like curry but is described otherwise; salad, dressing that claims to contain balsamic vinegar, a rubbery substance masquerading as cheese, crackers, biscuits, a bread roll. All the joys of airline food, basically. I notice the various offerings have different names depending on whether they are being offered to Americans (Tortellini, Cobb Salad) or The Uninitiated (generic names like chicken salad, chicken with coconut, pasta). The film finishes and I wonder why Maggie Smith decided to leave what is essentially an old people’s home and therefore equipped for death in order to die quietly in a corner like a cat.

Food and drink are a recurring theme. No passenger must ever have to ask for refreshment on a Delta flight. Once the film is over, I sleep and am gently awoken – how much later? – to be offered bottled water. Doze again, and ice cream interrupts. I sleep through at least one coming of the drinks trolley. It’s as if it would be unthinkable for any Delta guest to actually have to wonder about food before it was offered. 60 minutes before landing I am awoken more definitively to choose a snack, a chicken wrap I regret the moment it touches my lips and discard immediately. Accompanied by a rock-hard tiffin and a mint, this snack would pass for lunch in many quarters I know. The cabin crew tut at my nibbled wrap. The drinks trolley appears again, while Naomi Watts and Ben Stiller make friends with hipsters and learn hip hop dancing.

At Boston’s Logan airport I buy a lobster-patterned gift for my Goth and take a few pictures of the view from the airport windows – sadly the only bits and pieces I will see of the city this visit. The welcome is aggressive. It’s not enough for border control to welcome you to the United States. No, visitors must be welcomed to Boston by a voiceover addressed from “all the people who call this city home.” Boston, visitors must understand, is “the hub of the universe.” It’s the sort of pride I’m used to seeing shot down and beaten to a pulp. How do the other American cities feel about Boston being the hub of the universe? Aren’t they annoyed at it setting itself so high? I think about the bloodshed that would occur if London decided to adopt an ambitious strapline. I’m pretty sure even something as factually correct as “The Seat of Monarchy” would result in a storming of the capital involving axes.

A s crap of Boston as seen from Logan Airport

The moment I step off the plane I experience the Brit’s fear and panic of unwanted contact. As each person approaches, I brace myself for being asked how I’m doing, making eye contact, replying, trying to conceal my shudder. At security the staff are chirpy even while requesting the handover of my shoes and making me hold my hands up like a captured highwayman for a full-length body scan. I crave the surly air of menace that characterises British and European airport staff, the frowns,  silences, and half-barked commands. British airport staff don’t ask how you’re doing,  they do things like complaining that you  have an unnecessarily long name, as if at the point of naming you 30-odd years ago, your parents had just one object, to persecute airport staff executing random bag checks in 2015. The thing is, you know where you stand when the person frisking you refuses to make eye contact and communicates via grunts and hand gestures. 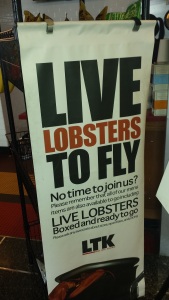 Live lobster for your flight?

The feeding frenzy continues at the airport. The women ahead of me in the immigration queue ask each other if they are hungry, admit they are not and decide they should eat a meal before boarding their flight. They don’t have to look far. Whereas in London you’re winning if at the end of your 20-minute dash to the gate there’s a Costa vending machine pissing out overpriced tepid coffee before you board your long haul flight, in Boston, comfort depends on being constantly assured that refreshments are available. The five-minute amble to my gate encompasses three branches of Dunkin Donuts, several sandwich, vendors, a bar and a seafood restaurant where you can purchase a live lobster to accompany you on your flight. At the gate, Dunkin Donuts is engaged in a face-off with Wendy’s. I’m intrigued by the concept of rich meaty chilli as a side to one’s burger, but I’m sure I’m about to be fed yet another snack by Delta.

I am not wrong. No sooner  are we in the air than nuts and “tea, coffee and Coca-Cola products” are handed out. I am about to blurt out a plea for tea when I remember the last tea handed to me was black and notice that the trolley contains only cream for coffee. Not to worry, I’ll have a tea – several teas – at my hotel. Except that I won’t. Because in my morning hurry, the big glaring error in my packing process was tea. Loath as I am to uphold national stereotypes, this is one I cling to like a shipwrecked child. Morning is unthinkable without tea. I spend the next 5 minutes assessing the severity of the situation. The two London colleagues travelling to London this week are European and therefore partake not of the sacred breakfast leaf. But there must be somewhere in this most global of cities where I can purchase Proper British tea. Our New York office, worked in by at least one British employee, may even have some. I can’t possibly go tea-less for a week, that would be misery. At the end of these brief and panicked ruminations, the pilot informs us we’ll be landing in 15 minutes and cabin crew stand over me until I surrender my empty nut packet and half-empty cup.

Logan airport is positively militaristic compared to La Guardia, where I am immediately assaulted on a arrival by a food hall, for those who find baggage reclaim too hard to face without a meal under their belts. It occurs to me that perhaps we set our sights too low in the UK,  hoping only for the chance of a wee before we go to check whether our worldly goods have successfully joined us at our destination.

Once again, the dread of contact surfaces, but my driver appears to have been briefed on the proclivities of Her Majesty’s subjects. He barely speaks and does not introduce himself. I find out that his name is Pierre from the ID on the dashboard. This is so overwhelmingly comforting that it makes up for the strangeness of a car fitted out with magazines, water bottles and tissues. The airport is more central than, say, Heathrow and in 10 or 15 minutes we’re in East 37th St, crossing over Lexington Avenue, Park Avenue, Madison Avenue and Broadway. The shops on West 37th are often gaudy pageant dress places that wouldn’t be out of place on Fonthill Rd in Finsbury Park. My first impression is that the skyline is immense, and overwhelming, like a constantly repeating Canary Wharf, unbroken by anything small or old-fashioned. The Empire State is a teeny-tiny building compared to its younger brethren, a little dinky tourist charm, the closest thing to a cathedral.

Pierre the driver adds to his charm by sighing loudly as we hit the toll road and not once – never – addressing me. He’s better than most Uber drivers in London at this rate. I hope he has been sufficiently briefed to be aware that I have no idea whatsoever whether or not to tip him, and then I start bracing myself for the hotel staff. They will want to proffer information I don’t need and ask me how I’m doing and it will take all the British brusqueness this weary traveller can muster to allay the assault.

Upon arrival I am handed an incubated chocolate chip and cinnamon cookie – my warm welcome – and handed my passkeys and Wi-Fi code. In my room I am saddened to note the presence of a coffee maker I have no idea how to use and the absence of a kettle, or any tea that isn’t camomile.

Delta Airlines has eliminated my appetite for a full-sized dinner, so I wander down to Lexington Avenue to look at the market and purchase some spicy roasted corn on the cob from a Venezuelan lady.

Also two t-shirts for my niblings. “Boys or girls?” asks the vendor, her hand hovering between a Princess t-shirt and a NY taxi one. “Girls, but I don’t want to give them anything gender-normative,” I reply, feeling like an absolute wanker as I grab one blue tshirt with New York emblazoned on it and one red one with a yellow taxi on the front.

I spy the Chrysler Building and take a quick photo, find Macy’s, the closest museum and my nearest 7-11 and ascertain that Dunkin Donuts is more prolific than McDonalds. It’s barely 7pm, but I think I will save exploration for another day. I have five of them ahead of me, after all.